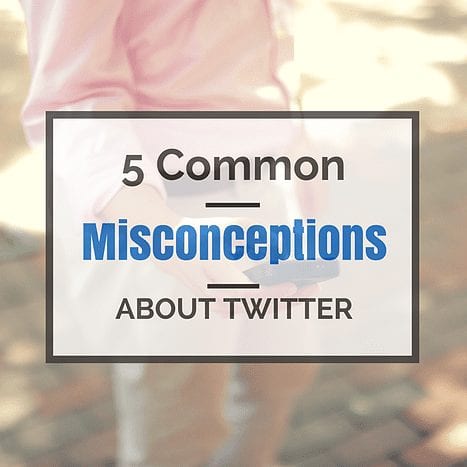 One of the most often heard phrases from my clients and even friends is that they don’t understand Twitter. “How does this help my business? It seems like a waste of time. Is it just another Facebook?” Personally, I feel that Twitter is one of the most underutilized social media networks for small businesses. This blog post is directed at some of my current and past clients to clear up five of the most common myths and misconceptions about Twitter for business.

You’ll find that when you start typing out a tweet, 140 characters still lets you put out a lot of information. A typical tweet format has short text or an article title, a link, and 1 to 2 hashtags. Also, the 140 character limit keeps the tweets clear and concise. It’s not sifting through 500 words of a blog post or 2 paragraphs in a Facebook update – it’s short, sweet, and to the point. Don’t miss out on great content and a great way to share your own content because you don’t like the character limit. You can see examples of how I use the 140 character limit to curate content, socialize with fellow tweeters, and build my business on my Twitter account.

2. If We Don’t Have a Lot of Followers Twitter Doesn’t Work

On Twitter, some of your biggest brand ambassadors will have the least amount of followers. But, even if the person retweeting your content only has 100 followers, that’s still 100 more people to see your content, and then if one person retweets it to their 100 followers, and so on. Twitter is a great amplification tool! So, as a business, if you have less than 500 followers – it’s okay! Don’t ever buy followers. Grow your Twitter list organically. Share it on other social media networks, add social media sharing icons to your blogs and newsletters, tell your customers in store about your new Twitter feed, and add your Twitter handle to your business cards. You can also use tools like ManageFlitter, Crowdfire, and Social Quant to give you an extra boost.

Twitter is a micro-blogging platform. What that means is that it is used in making short and frequent posts. Frequent is the keyword in that phrase. According to The Moz Blog, the shelf life of a tweet is only 18 minutes! That means, you could post 20 or more times a day and not be marked a spammer like you would on Facebook.

5. Hashtags Are Just Some Trendy Thing for Teens

Hashtags are here to stay and they’re not just for teenagers. Hashtags are a word or phrase preceded by a hash or pound sign.  These words and phrases are used to identify the topic or main keywords of a message. On websites like Twitter and Facebook, it creates a hyperlink where the hashtag will then bring up every public update tagged with the same hashtag keyword. By using a hashtag you can jump on a current trend, connect with influencers who share about the same topics, and even create your own unique hashtag to track and analyze your followers, clients, and people talking about you online.

I hope I was able to clear up a few things about using Twitter for business. Do you have a question about Twitter? What’s the craziest thing that you’ve heard about Twitter? Share in the comments.